Brenda Ferretti
Outreach manager
10 April 2020
Veganuary has been over for two months now and people are still talking about it. The data from the official surveys has been published and it was a great success. The biggest global project that encourages people to adopt a vegan diet had a huge following and many of those who participated are continuing their plant-based lifestyle. The data also shows great enthusiasm on the part of Italian participants. Essere Animali brought this global initiative to Italy for the first time and the response was incredible, leading our country to rank third in Europe in terms of the number of people signing up. Next year, with your help, we will aim even higher!

This year, 402,206 people from 192 different countries registered for the month-long vegan challenge. The scope of these figures is truly significant, especially considering the corresponding number of animals saved. The organisers of Veganuary had originally calculated that if 350,000 people avoided consuming animal products for a month, 1 million animals would be saved from slaughter. And the number of participants even exceeded expectations! What’s more, large numbers of Italians contributed to this success: with more than 15,000 participants, Italy ranked seventh in the world, with Milan coming in sixth on the global list of cities with the most participants. Over 50% of participants said they signed up for ethical reasons, in particular 37% to save animals and 18% for the environment. The remaining 38% indicated health as their main motivation. 51% of those who took part in the initiative were still eating meat at the time of signing up, while the remaining 30% were vegetarians. 19% of the participants were already on a vegan diet.

When the 31 days of Veganuary came to an end, a survey to which about 10% of the participants responded was sent out. Many of the questions were direct and excluded those who were already vegan, in order to assess the project’s impact on changing the diet of the rest of the participants. More than half of the non-vegan participants maintained a completely plant-based diet throughout January (59%), of whom an incredible 72% are continuing and wish to continue a vegan lifestyle. The reasons that led people to this transition were as follows: And even though some of the participants did not follow a 100% vegan diet during the month, 77% of them consider it highly likely that they will try a vegan diet again in the future. 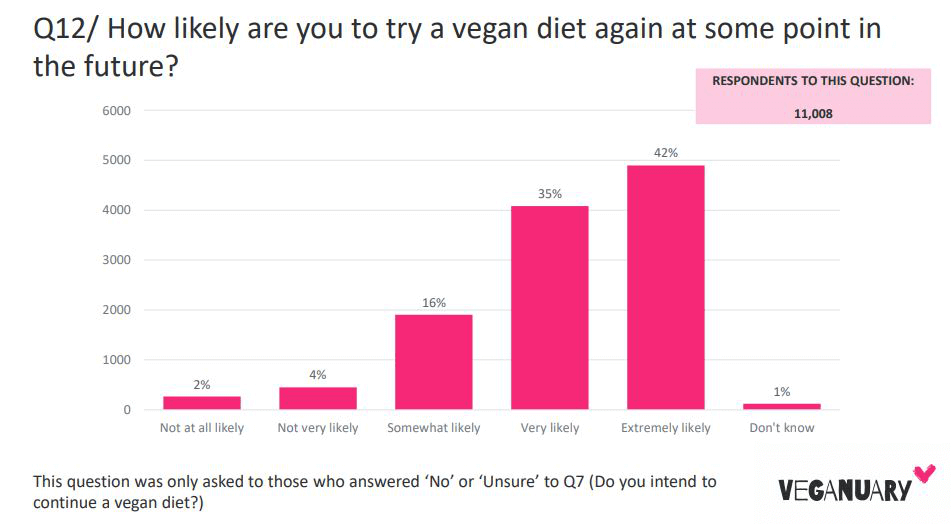 For those who did not manage to follow a vegan diet, the most commonly reported difficulties were sticking to a vegan diet when eating out, interacting with friends and family or feeling the lack of various foods of animal origin. And this reminds us that still today, despite the fact that there are many more products on the market and many more places to eat, there is still much to be done to make everyday life easier for those who wish to make this choice and to ease negative social pressure. 54% of the participants also experienced positive health benefits, with the most frequently cited as follows: 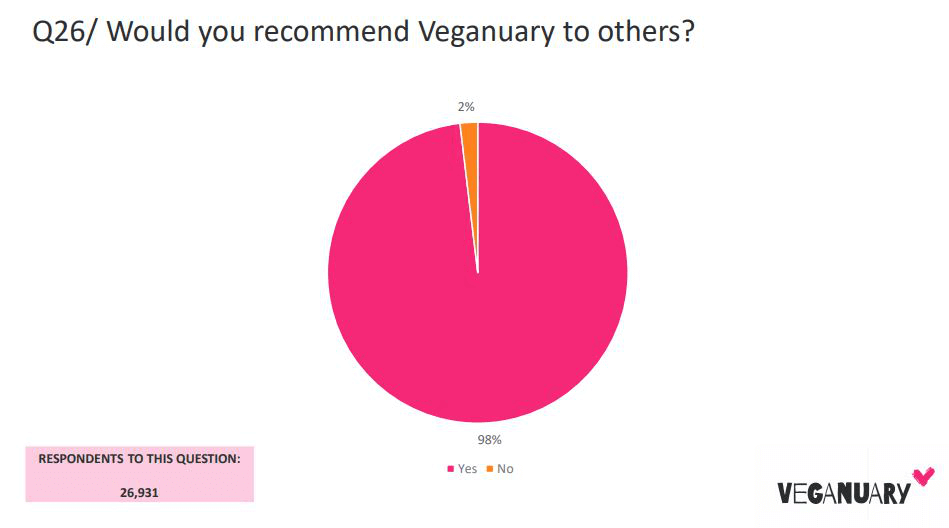 There is another, even more important, fact. Whatever their reasons for trying this month-long vegan challenge, and whatever different results they may have experienced, 98% of participants said they would recommend Veganuary to other people! This same result has been repeated over the years and is also perfectly reflected in the responses of the participants in our Settimana Veg (Vegan Week) project. It is clear that trying a week or a month without animal products, reviewing your diet and the way you cook, discovering the reasons for adopting a vegan lifestyle and knowing the information that leads to this choice is always a positive experience. We are very happy to have taken part in this project of great impact and to have brought it to Italy, helping so many people to make a change as a result!